Lovesick Blues tells the story of the singer’s life in retrospect from the night he died, tastefully peppered with the unforgettable songs of his career. The various scenes of the play are anchored with Williams in the back seat of his 1952 Cadillac, which is where he was found dead while en route to a performance scheduled for New Year’s Day 1953 in Canton, Ohio.

Other major characters in his life have speaking parts off stage, giving the illusion that he’s remembering the important events in his life. The first is when Williams remembers meeting Rufus “Tee Tot” Payne, the man who taught him how to play guitar, and then to meeting his wife Audrey Sheppard, his career skyrocketing as he became a regular on the Louisiana Hayride radio show and his debut and tenure at the Grand Ole Opry.

The performance is filled with more than 20 of Williams’ memorable songs, including “Your Cheating Heart,” “Hey Good Looking,” “I Can’t Help It If I’m Still In Love With You,” and, of course, “Lovesick Blues.” Joining Harris’ Hank on stage will be a facsimile of the singer’s famed band, The Drifting Cowboys, composed of Gina Forsyth on fiddle, Terry Huval on steel guitar, Kenneth David on bass, Kyle Harris on lead guitar and Bobby Dumatrait playing rhythm guitar, with Cajun folklorist Barry Ancelet on hand as a script consultant. The show is directed by Jody Powell.

Though Hugh Harris mulled over the concept for the production for years, it didn’t come to fruition until Ancelet suggested in 2005 that something special be done to commemorate Williams on New Year’s Day, the anniversary of the singer’s passing.

“We all got our heads around doing this one-man performance and came up with a script and integrated it with the music,” says Harris. “A lot of singers come in and they all do tributes to Hank Williams, so we decided we wanted to take it to the next level and do an actual, theatrical-style performance instead of just a musical performance.” 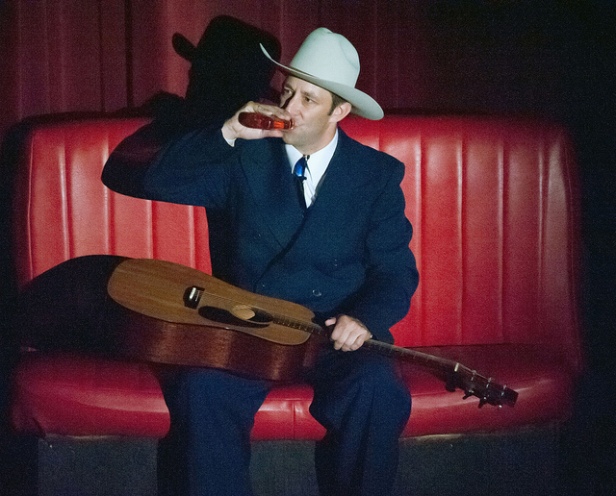 Another aspect of the singer’s life that the play doesn’t ignore is his drinking. According to Harris, this topic splits Hank Williams followers into two schools of thought. He refers to the first group as “St. Hank,” those who say Williams only drank on special occasions like New Year’s. And then there are those he says believe the singer never drew a sober breath since he was 13 years old, a group he refers to as “Hank the Derelict.”

“The truth is that he was somewhere in between,” says Harris. “The actual facts of history do not support either one of those. What we have attempted to do is, yes, there is a drinking scene so you know what happens. We do not ignore it. It was part of what made him up, but it was not what defined him.”

Lovesick Blues is steeped in Williams’ legacy, and much of its content was influenced by the group’s opportunity to have played with the last living member of Williams’ band the Drifting Cowboys, the late Don Helms, at numerous Hank Williams tribute concerts. The play also celebrates the strong connection and rich history Louisiana shares with Hank Williams.

“There’s a lot of people who come to our shows that actually saw Hank Williams play in person. They enjoy the opportunity to relive those experiences through this play,” says Huval. “Hugh Harris has studied the Hank Williams persona quite well and does a really great job in carrying the trial, the tribulations, the victories and the struggles that Hank Williams had to give the audience a better flavor as to what his life was really like.”

[This article originally appeared in the Jan. 12, 2012 edition of the Independent and TheIND.com.]